The mutation of viruses

When any genetic material reproduces — be it the smallest viruses to humans — random errors (or mutations) occur. While higher organisms possess the mechanism to correct these errors, viruses and especially the RNA viruses do not contain any such mechanisms. The majority of mutations are harmful, but such viruses are never seen. Only those mutations that provide some careful advantage result in the development of novel viral variants.

Why is the new variant of SARS-CoV-2 from the United Kingdom causing fear?

Three things are accumulating at present which is causing fear concerning the UK variant:

There is extensive concern that these mutations may end the role of currently used tests in detecting the virus, make it more threatening, or let it escape the vaccines. However, till now, no evidence exists which proves any of the above worries. In any case, these variants were diagnosed by currently available RT-PCR tests.

Said so, there is clear evidence that this variant is more contagious. Patients getting infected with this variant produce more virus in their nose and throat, which leads to more shedding of the virus and more chances of transmission from one person to another. Though these variants seem not to be more lethal, being more contagious means that there would be higher numbers of severe infections and deaths, which is currently a cause for worry.

Why should people not panic?

The majority of professionals believe that vaccines presently in development and use would also work on the variant viruses.

Will the vaccines work against the new variant?

All leading vaccines, available in the UK and elsewhere, where the variant is spreading extensively, are capable of developing an immune response against the existing spike. Vaccines enable the immune system to attack several different target sites on the virus, hence despite a mutation of a single spike, the vaccines should still be effective.

How far has it spread?

The discrete mutant (named B.1.1.7) of SARS-CoV-2 was recently identified in the UK. The two earliest variants of this viral lineage were collected on September 20 and 21 from Kent and Greater London respectively. By December 15, this family grew to 1,623 viruses in London and other regions of the UK including Scotland and Wales, and then in Europe and later in Australia (4 from Australia, Denmark, Italy, and The Netherlands). On Christmas eve — the cases of these variant viruses more than doubled to 3,575; majority from the UK, but also being reported from France, Ireland, Israel, Hong Kong and Singapore.

Data suggests that cases in Denmark, Australia, and The Netherlands came from the UK. A similar variant even appeared in South Africa which shared several mutations of the UK variant, but seems not related to this one.

Has this phenomenon occurred earlier?

Yes. The virus that was detected first in Wuhan, China, is different from the virus that is found in the majority of the places in the rest of the world. The D614G mutated variant emerged in Europe in February and became the leading form of the virus, worldwide. Another mutated strain, called A222V, spread throughout Europe and was associated with Spanish patients, traveling in summer.

What do we know about the new mutations?

Does it make the infection more deadly?

No present evidence indicates that these mutations produce deadlier forms of the disease, but, it needs to be watched. Also, just growing transmission would be sufficient to create troubles for the health care system. If the new variant is capable to infect more people rapidly, it would mean that an increasing number of people would necessitate hospital treatment at a single reference point.

Can such mutated variants spread in India? 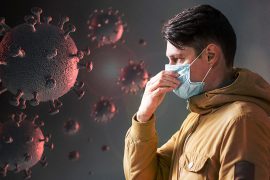 Post-Covid Care and Recovery at Home

Don’t lower your mask; the pandemic is not over yet